Possession of a Controlled Substance-A unit responded to the international port of entry 2 shortly after 3:45 AM whereupon arrival, contact was made with a couple detained by Customs and Border Protection agents. Further investigations revealed the pair, twenty-one year old Lorna Sofia Contreras and twenty-one year old Angel Luis Lopez were attempting to enter the United States in a 2014 Nissan Altima when agents were able to located approximately 2.48 kilograms of methamphetamine. The two were then placed under arrest and transported to the Tom Bowles Detention Center for processing.

Posted by MavCoSheriff at 4:58 PM No comments:

Aggravated Assault with a Deadly Weapon-A resident on the 100 block of Pino Street reported she had been assaulted by a known male subject who displayed a deadly weapon towards her and threatened serious body injury. The subject then fled the area prior to a unit's arrival. A formal report was filed.

Wanted Person-A deputy responded to the international port of entry 2 this evening after agents at the port detained a male subject attempting to enter the United States when a check revealed an open warrant for his arrest. The warrant out of the Texas Department of Criminal Justice Parole Division for fifty-four year old Irineo Gamez was confirmed and he was taken into custody before being transported to the Tom Bowles Detention Center for processing.
Posted by MavCoSheriff at 4:46 PM No comments:

Kidnapping-Units responded to US Highway 57 after being altered of a female subject begin held against her will while travelling inside a vehcle. Contact was made with the vehicle in question, a 2017 Chevrolet Silverado travelling southbound on 57 near Loop 480. The female subject inside the vehicle told deputies she had been travelling with the male subject, identified as twenty-two year old William Martinez, who was supposed to have left her in San Antonio after travelling from Brady, Texas. She further stated Mr. Martinez refused to leave her in San Antonio, Texas and continued travelling towards Mexico despite several requests to leave her. She wished to press charges and Mr. Martinez was taken into custody and transported to the Tom Bowles Detention Center for processing.

Posted by MavCoSheriff at 4:33 PM No comments: 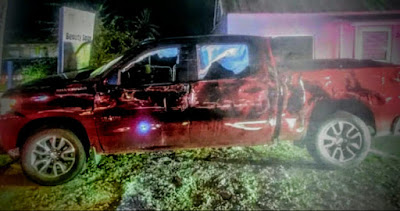 Leaving the Scene of an Accident-
Deputies this morning were advised a 2020 Chevrolet Silverado driving recklessly inside of the Maverick County Lake property had veered onto the white dividing pillars at the lake, causing damages to the area as well as the vehicle before fleeing in an unknown direction. Contact was later made with City of Eagle Pass Police officers who reported they had detained a vehicle matching the description on Del Rio Blvd. The driver, seventeen year old Fernando Sanchez, confirmed he had been involved in the accident and was taken into custody before being transported to the Tom Bowles Detention Center.

Possession of a Controlled Substance-Fifty-one year old Berenice Rivera was placed under arrest at the international port of entry 2 shortly after 4:00 AM this  morning after agents at the port found Rivera in possession of heroin and methamphetamine. Rivera was then transported to the Tom Bowles Detention Center for processing.

Posted by MavCoSheriff at 2:28 PM No comments:

Evading Arrest with a Motor Vehicle-An attempted traffic stop on Rosita Valley Road ended inside city limits this afternoon after the driver of a 2014 white Ford Fusion failed to yield and led deputies on a pursuit. With the assistance of DPS units and City of Eagle Pass officers, the vehicle came to a stop on the 700 block of Colorado Street, where the driver attempted to flee on foot. The male subject identified as Kevin Ortiz was quickly apprehended and placed under arrest. His female passenger was released. The vehicle was towed to the Maverick County Sheriff's Office for further investigation.
Posted by MavCoSheriff at 12:00 PM No comments:

Possession of a Dangerous Drug/Possession of a Controlled Substance/Public Intoxication-A deputy responding to safety calls for a pedestrian seen on FM 1021 this morning made contact with the female subject, who displayed an unstable balance and signs of intoxication. The subject, twenty-three year old Julia Galvan, gave consent to search her property, where a clear plastic bag containing a substance appearing to be heroin was discovered, along with two Alprozalam pills, empty syringes, and a glass pipe. Ms. Galvan was placed under arrest and transported to the Tom Bowles Detention Center, where a test on the substance recovered resulted positive for approximately 3.4g of heroin. 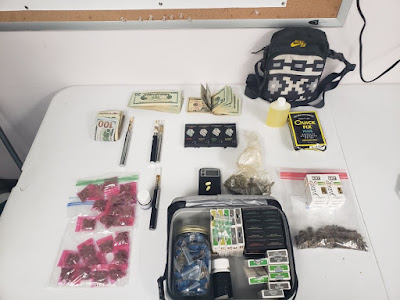 Possession of a Controlled Substance/Possession of Marijuana under 2 oz.-Deputies performing stonegarden operations this evening conducted a traffic stop on FM 1021 for a minor violation. Contact was made with the driver and the occupants of the vehicle, who would later be found in possession of several narcotics discovered inside the vehicle(THC, Marijuana, Controlled Substances). The subjects, Raul Martinez, Israel Marquez-Calixto, and Juan Carlos Torres were all placed under arrest and transported to the Tom Bowles Detention Center for processing.

Posted by MavCoSheriff at 11:03 AM No comments:

Motor Vehicle Accident with a Fixed Object-Units responded to the 100 block of Los Sauces shortly before 3 AM this morning after a 2003 Ford Expedition had struck a tree, causing minor damages. Contact was made with the driver, identified as Arnulfo Mireles, who was initially found asleep in the driver's side seat. He was then taken into custody on public intoxication charges and transported to the Tom Bowles Detention Center for processing.

Public Intoxication-Deputies arrested thirty-seven year old Adrian Rodriguez this morning after receiving calls of an unwanted male subject at a location. Contact was made with Rodriguez upon arrival at the location and found him displaying bloodshot eyes, a slurred speech, and emitting a strong alcoholic odor on his person. He was then transported to the Tom Bowles Detention Center for processing.

Posted by MavCoSheriff at 5:04 PM No comments: